Due to the University of Louisville vs. University of Kentucky scheduled on December 21st the 2016 Forcht Bank King of the Bluegrass is modifying its schedule to avoid a conflict with the game. The event will now be played on December 16-20. All Kentucky teams will play games on Friday or Saturday, Sunday, Monday and Tuesday. Due to state sanctioning rules the out of state teams will play their first and second round games on Saturday and return to play for the semifinal round on Monday and Championship round on Tuesday.


Please see the sample bracket below for more information. 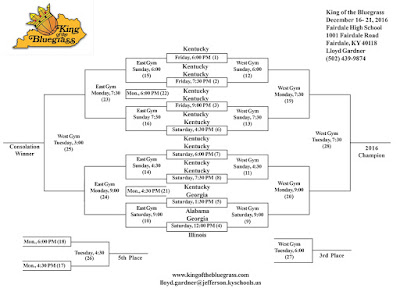 Posted by King of the Bluegrass at 6:18 AM