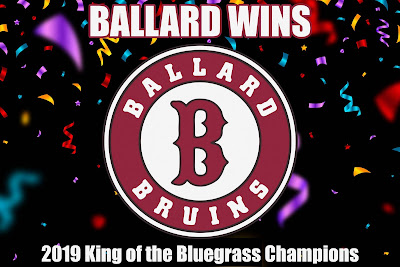 As the 2019 Chad Gardner Law King of the Bluegrass came to a close, it was a pair of local school’s vying for the title with No. 17 North Oldham taking on No. 6 Ballard, the tournament’s all-time wins leader. The game was loaded with young talent as four freshman and a sophomore started in the Championships matchup. It was a senior, Terrence McDaniels, that came into the game as the Bruins lowest scoring starter, that would make a huge impact for Ballard as they claimed their fifth all-time King of the Bluegrass title. The win would also keep the KOB in the Kentucky’s loaded 7th region for the 10th time in the last 20 years.

A thrilling first 2:30 of play saw the two teams all knotted up on three occasions with a pair of lead changes. Dallas Roberts hit a pair of three-pointers and Thomas Ashton added the next five points as North Oldham put together a 11-0 run midway through the first quarter to lead 17-9. Josh Minkins would get the Bruins within five points on the next possession and Lewis Richards would add eight points late in the first quarter to cut the North Oldham led to 23-22 at the quarter break. A Gabe Sisk 3-pointer on Ballard’s first possession of the second quarter would put the Bruins back ahead 25-23. A three-pointer by North Oldham’s Austin Carr-Cole would tie the game back at 29-29 midway through the second quarter. Another 3-pointer by Thomas Ashton would put North Oldham back ahead at 34-33, but the lead wouldn’t last as Terrence McDaniel’s basket on the Bruins’ next possession put Ballard back ahead. A basket by Chaunte Marrero at the buzzer would send Ballard to the locker room leading 40-36.

A pair of buckets by Ballard’s Maker Bar early in the second half were key in a 8-2 Bruins run to expand their lead to 48-38. Jack Edelen’s basket midway through the quarter saw the Ballard lead grow to 12 points as 54-42. A 5-0 run by North Oldham cut the Ballard lead to 47-54 on a pair of Ian Higdon free throws. Ballard countered with their own 6-1 run expanding the lead back to double digits at 60-48 with less than two minutes remaining in the quarter. Chaunte Marrero’s basket in the closing seconds of the quarter kept Ballard ahead 65-53 at the end of the third quarter. The Mustangs would hold Ballard scoreless for the first two minutes of the final quarter but were unable to get any closer than 8 points missing 2-of-3 early field goals and a pair of free throws. Three minutes later Terrence McDaniels putback expanded Ballard’s lead to a game-high 15 points. It was not until the final minute of play that North Oldham could cut the Ballard lead to back to 10 points, but it was too late as time expired with the Bruins leading 82-72. The victory was a tournament record 63rd victory for the Bruins and gave them a tournament record 5th King of the Bluegrass Championship. 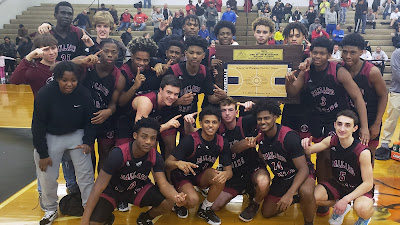 Posted by King of the Bluegrass at 9:24 PM