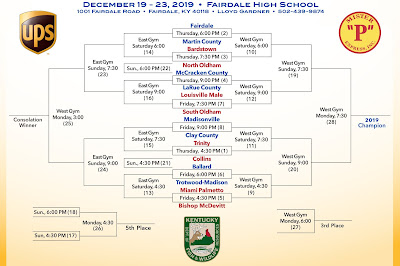 The 39th Annual Chad Gardner Law King of the Bluegrass will once again feature a field loaded with talent from across the Bluegrass state and the country. Half of the Courier-Journal’s Kentucky Preseason Top 10 teams will compete for the prestigious title. This year’s field features nine teams ranked in the Top 25 in the state, including regional favorites from the second, seventh, eighth, and thirteenth regions. There’s plenty of individual talent as well with seven of the state’s top 10 players competing in the event. This year’s field also includes four former King of the Bluegrass Champions including Ballard, Fairdale, Male and Trinity.

The 2019 Chad Gardner Law King of the Bluegrass will tip-off with a four-game slate on Thursday. An explosive re-match of last year’s KOB semifinal between defending Kentucky State Champion and 8th ranked Trinity and 4th ranked Collins opens first-round play. The Shamrocks, who have advanced to three of the last four KOB Championship games, will be led by junior guard Ethan Hodge after losing all five starters from last year’s team. The eighth region favorite, Titans who advanced to last year’s KOB championship, are led by the duo of Western Kentucky signee Dayvion McKnight and Samford signee Marcellus Vail. In the second game of the day, host Fairdale will take on Martin County. The host Bulldogs are led by the senior guard duo of Ty Walter, one of the state’s top 3-point shooters last season, and Stephen Moore. Martin County, playing their first season since the opening of their school, will be led by 6’10” junior Trey James. The 7:30 game on opening night will feature 22nd ranked Bardstown taking on 17th ranked North Oldham in a match-up of two of the state’s top seniors. North Oldham, making their first tournament appearance since 2005, welcomes the addition of sharpshooting Auburn signee Justin Powell, who spent last year at Florida powerhouse Montverde Academy. Bardstown is led by 6’8” senior forward JJ Traynor who signed to play at the University of Louisville. The final game of the evening will feature 13th ranked McCracken County taking on LaRue County. The Mustangs, picked to finish 2nd in the first region, are coming off a 31-4 finish last season and will make their first KOB appearance led by Murray State signee Jackson Sivills. LaRue County returns to KOB for the second straight year, following a 26-5 record last season, led by 6’7” senior Mark Goode, a Western Kentucky University football commit.

Friday’s first round action opens with the three out-of-state teams in action. In the opener, it will be Palmetto of Miami, FL taking on Bishop McDevitt of Wyncote, PA. The Panthers of Palmetto, who are making their second KOB appearance, finished last season with a 20-8 record and are led by 6’5” senior forward Kentron Poitier. Bishop McDevitt comes into the event ranked 66th in the nation in the MaxPreps 2019-20 Preseason Top 100. The Royal Lancers, coming off a 22-7 record and Pennsylvania Class 3A semifinal appearence, are led by 6’4” senior forward Jamil Manigo. In the second game of the day Kentucky’s 6th ranked Ballard will take on Trotwood-Madison of Trotwood, OH. The Bruins come into the event with a tournament-high 59 all-time wins and will look to the inside-outside combo of Rashad Bishop and Lewis Richards to lead the way. Trotwood-Madison is coming off a 29-2 season and Ohio Division II State Championship. The Rams are led by the senior trio of Carl Blanton Jr., Keon’tae Huguely, and Sammy Anderson, a Cincinnati football commit. Friday’s 7:30 game will feature the state’s top ranked Male Bulldogs taking on 18th ranked South Oldham. The Bulldogs, ranked 65th in the nation in the MaxPreps 2019-20 Preseason Top 100, are led by the senior duo of Howard Fleming, an Illinois State signee, and Tyren Moore, a Lincoln Memorial commit. South Oldham is coming off a 21-10 season and is led by senior Luke Morrison. The final first round matchup will feature regional favorites Madisonville-North Hopkins and Clay County. The 3rd ranked Maroons of Madisonville, coming off a 30-6 season that saw them advance to the state quarterfinals, return the duo of Kenny White and Ksuan Casey. Unranked Clay County, favorites in the 13th region, are led by 6’3” junior guard Connor Robinson.

The 2019 Gardner Law King of the Bluegrass will continue with the quarterfinal round beginning at 4:30pm Saturday with all 16 teams in action. All 16 teams will return to the courts on Sunday for a full slate of games beginning at 4:30pm with the semifinals scheduled at 7:30 and 9:00pm. The final day of action will tip off at 3:00pm on Monday with the Championship game scheduled for 7:30pm.

Posted by King of the Bluegrass at 9:16 PM

Email ThisBlogThis!Share to TwitterShare to FacebookShare to Pinterest
Labels: 2019