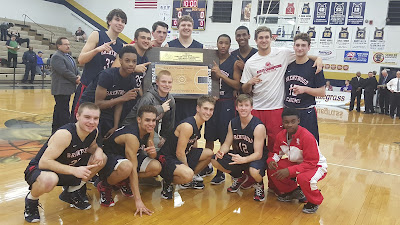 The 2015 Forcht Bank King of the Bluegrass Championship was a classic battle between undefeated opponents in Brentwood Academy (10-0) and No. 10 Trinity (9-1). The game provided plenty of spicy matchups and the teams battled to 10 lead changes before the Eagles of Brentwood Academy claimed the King of the Bluegrass title in their first tournament appearance. The win extended the Eagles overall winning streak to 20 games.

Brentwood Academy got off to a quick start behind 2015 State Tournament MVP Jeremiah Oatsvall who scored the first seven points for the Eagles to take a 7-3 lead. Junior LJ Harris jumped started things for Trinity scoring four big points to help the Shamrocks pull back to tie the game at 7-7. The teams combined to shoot five three-point field goals over the final three minutes of the opening quarter with Lukas Burkman's three-pointer giving Trinity an 18-16 lead at the end of the period. The Shamrocks lead grew to five points early in the second quarter. A basket by Jeremiah Oatsvall midway through the second quarter put the Eagles back in the lead 24-23. Trinity got eight straight points from junior Jacob King to extend their lead back to five points. Oatsvall closed the half with an old fashion three-point play to cut the Shamrocks lead to 31-29 at the half.

The two teams exchanged buckets early in the second half before a Parker Suedekum three-pointer pulled the Eagles back within 37-36. Trinity halted the Eagles progress with an 8-0 run midway through the third quarter to extend their lead to a game-high eight points. Brentwood Academy found their own momentum during a 9-2 run to pull within 47-46 in the final minute of the third quarter. The streaks continued with Trinity piecing together a 7-2 run in the opening minute of the fourth quarter to take a 56-48 lead. Eagles' sophomore Darius Garland single-handedly scored the next eight points for Brentwood Academy to tie the game for the first time in the second half at 56-56 with 4:52 remaining. Two trips later Darius Garland put the Eagles back in front 61-60 with his fifth three-point field goal of the game. Jacob King put Trinity back in the lead less than a minute later with a pair of free throws. Tyler McNair's basket on the ensuing possession gave Brentwood Academy the lead for good. Darius Garland's block on the defensive end gave the Eagles the ball back for Parker Suedekum to push the lead to 65-62 with a pair of free throws. LJ Harris gave the Shamrocks a last bit of hope with a putback with 27.4 remaining in the game. Darius Garland scored on the Eagles next possession with an assist from Cam Johnson to give Brentwood Academy a 69-64 lead. The Shamrocks missed their fourth straight three-point attempt on their next possession and Parker Suedekum's basket in the closing seconds sealed the 71-64 victory for the Eagles.