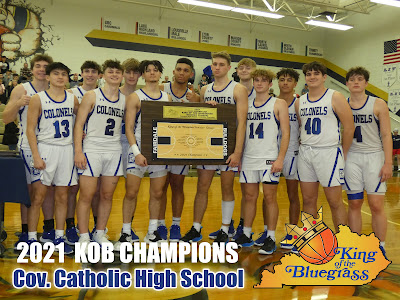 The 2021 King of the Bluegrass Championship lived up to all the hype as top 10 opponent Covington Catholic and North Laurel battled it out for 32 minutes. It was a strong shooting second half and depth that eventually helped Covington Catholic pull out the 79-67 victory to claim their first ever King of the Bluegrass Championship. The opening quarter saw the two teams exchange the lead seven times. Covington Catholic ended the quarter with three straight three-point baskets to take a 16-14 lead at the quarter break. The Colonels lead grew to as many as four points early in the quarter. Reed Sheppard pulled North Laurel back within 23-24 with a three-pointer three minutes into the second quarter. Evan Ipsaro scored the last eight points of the half for the Colonels who used an 9-2 run to push their lead to eight points where it stood at the half 37-29. 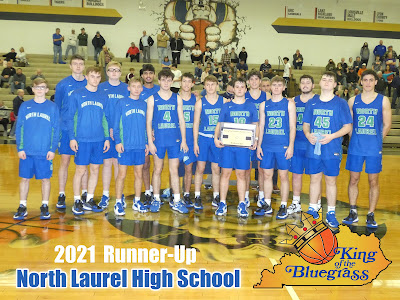 Evan Ipsaro led all scorers with 34 points to lead the Colonels. Covington Catholic got 19 points and 10 rebounds from Mitchell Rylee and 13 points from Brady Hussey. Bob White Most Valuable Player selection Reed Sheppard led North Laurel with a triple-double with 25 points, 10 rebounds and 10 assists. Ryan Davidson added 25 points for the Jaguars.

Posted by King of the Bluegrass at 9:42 PM