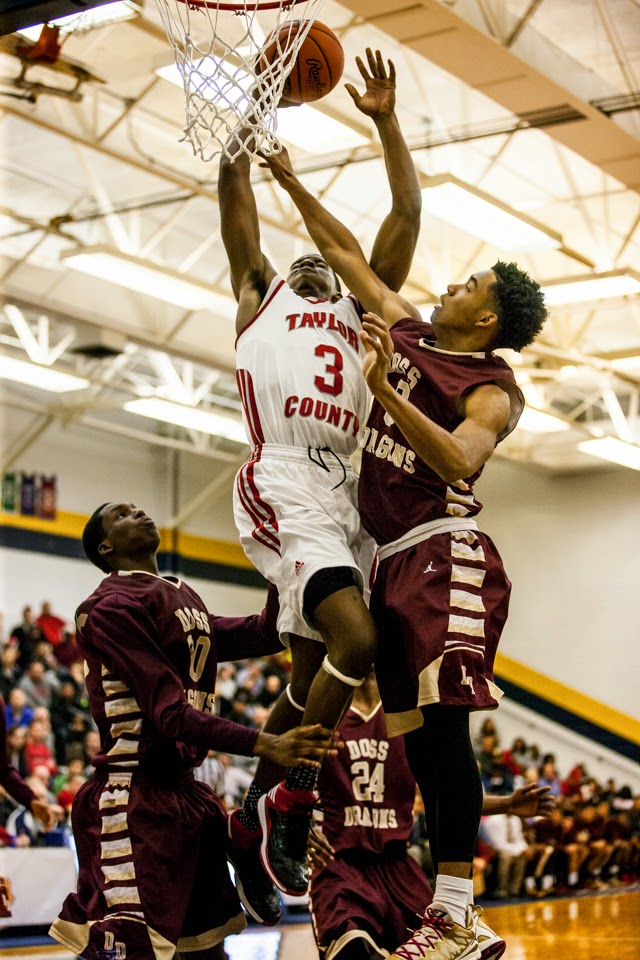 Just one night after both teams upset higher ranked opponents, Doss (6-1) and Taylor County (10-0) shared the spotlight in our opening semifinal. The match up was one of four Top 25 match ups on today's schedule.

The two teams battled back-and-forth in the opening quarter hitting four 3-pointers in the opening 3:30 of the game to hold even at 9-9. A 10-2 run by Taylor County over the next two minutes pushed the Cardinals ahead 19-11 and a Cam Morgeson 3-pointer in the closing minute of the first quarter pushed the lead to twelve points. Back-to-back 3-pointers by Doss' Dujuanta Weaver pulled the Dragons back within two points midway through the second quarter. The Dragons couldn't get any closer in the opening half with Taylor County taking a 46-41 lead to the locker room.

Doss came out hot in the second half scoring the first six points of the half to give them their first lead of the game at 48-46. The Dragons tied the game for the final time at 50-50 with 5:06 remaining in the third period. Taylor County 19-5 run to end the third quarter with their largest lead of the game. The Cardinals lead continued to grow in the fourth quarter with Ezra Oliver's steal and basket with 5:36 remaining in play pushing Taylor County ahead by 18 points.  Doss cut the lead to eleven points on two different occasions including following William Brown's three-pointer with less than a minute to play but never got any closer. Taylor County's 94-83 victory advances the Cardinals to their first championship appearance in tournament history.

Quentin Goodin soared to a game-high 32 points, including 5 dunks, and 14 rebounds. David Sloan also paced Taylor County with 23 points and Devin Rafferty added 11 for the Cardinals. Doss was led by senior Dujuanta Weaver with 31 points and Terell Gray added 19 for the Dragons.